I have a confession. Although I love sharing my story on stage, one of my favorite parts of giving a keynote isn’t the speech it all. It comes when the talk is over and leaders from around the country introduce themselves and share their own experiences with me.

My latest talk in San Antonio was no exception as a young man approached me after with a question. He started by politely introducing himself as the owner of a successful small business. Then, he asked his question:

How am I supposed to transform my company’s culture if it doesn’t have one?

It’s not the first time I’ve heard the question, so in this article we’ll outline the response I shared with him.

Let’s cut straight to the point: Your company already has a culture.

The term “company culture” is another way of putting your finger on acceptable behavior. When you have multiple employees interacting with each other, there will be a code of conduct. What signifies a professional, friendly atmosphere between those people? Even if your company is a one-person operation, how you interact with clients and customers makes up your company’s culture.

As an entrepreneur, there’s a thousand things you must juggle. There’s not enough time in the day to analyze and make conscious decisions about everything. Instead, common sense wins out.

What does it mean for your employees to treat each other professionally? Use common sense.

How you should treat your customers? Use common sense.

For many situations, common sense makes, well, sense. There’s a certain point for every company that letting each person determine acceptable behavior won’t work anymore. Common sense for one person isn’t the same as common sense for another person. You should start focusing on your culture before you hit that point, but if you’ve already reached that point, it’s time to crank it into overdrive.

Let’s take a little deeper dive into this with some examples.

Can you spot the right scenario?

At my company, one of our core values is We Do More with Less. Which of the following scenarios do you think falls in line with that value?

Oliver comes into work early to finish a massive, new feature for the website. He stays until it’s done. It’s finally pushed live at 9:00 PM, and Oliver leaves at 9:30.

This isn’t a good example of We Do More with Less. Oliver’s prolonged hours followed by pushing a new feature live leaves it open the high risk of a mistake. There’s a good chance he’ll have to redo things after customer service gets slammed with people reporting the bugs.

Tina comes into work at 9:00 AM with the goal of fixing five prominent bugs on the website. She gets stuck partway and manages to only fix two but decides to send the fixes over to Oliver for him to check when he gets in the next day. She leaves at 5:30 PM without having pushing anything live.

This is a great example of We Do More with Less. Even though Tina didn’t push the fixes to the customers right away, she passed it off to make sure he didn’t notice anything wrong with it. Taking the time to get a second set of eyes is costlier up front, but it mitigates having to redo it again later.

Neither of the two choices jump out as being negative behaviors. In many situations, they’re both good examples of a dedicated worker. Still, only Tina’s scenario lines up with the core value of We Do More with Less.

Doing more with less in the context of the core values at my company isn’t about pushing yourself to get a project done fast. It’s not about coming in early to the office or staying late. It’s not about hitting numbers. It’s about doing your best to mitigate errors. Sometimes, that means having other people double-check your work.

Of course, Oliver and Tina’s scenarios are fictional. It’s possible Oliver could push the new feature live and not have any bugs. The point of this exercise isn’t about the website, but about clarifying your core values for your tribe. There shouldn’t be any doubt. As a leader that’s not a gamble worth taking.

Did you pick Oliver or Tina first?

If you thought Oliver’s scenario fell in line with We Do More with Less because he got further along in his project, don’t worry. I didn’t communicate the full message to you. I told you one of the core values at my company, but I didn’t tell you how it’s defined.

I set you up for a higher chance of failure. 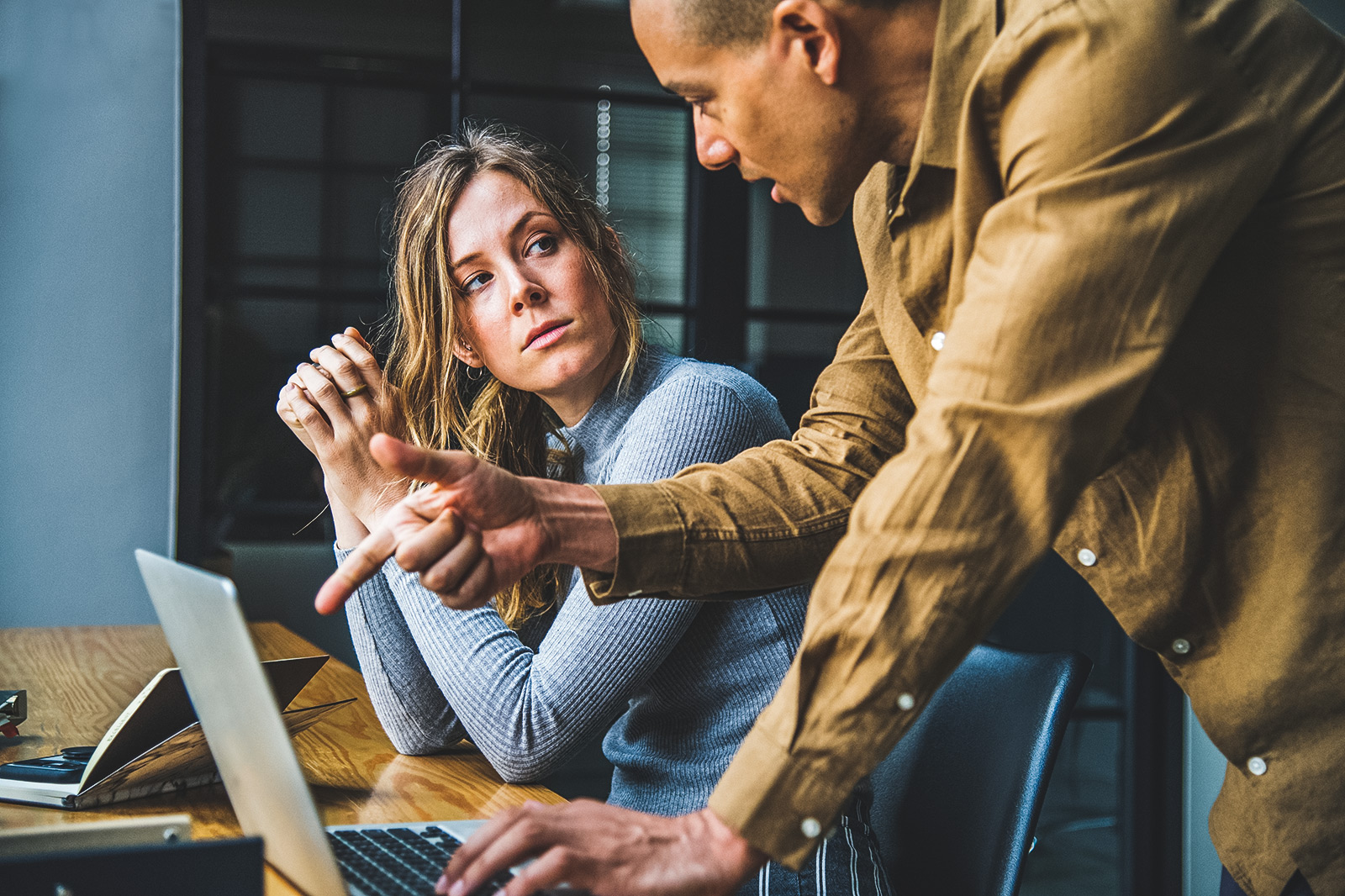 Set your tribe up for success

Saying something isn’t communication. When someone understands what’s said, that’s when the message has been communicated. The message you’re sending is the one received.

Here’s how I define the core value of We Do More with Less for my tribe: “For us, doing the right thing, the right way the first time is less about speed and more about the right mixture of accuracy and effectiveness.”

With your newfound clarity, picking the scenario that exhibits We Do More with Less should be a lot easier:

John has a target talk time of eight minutes per customer as a tech support rep. He talks to 20 customers throughout the day for an average talk time of 24 minutes. One of them calls back the next day.

You got it! John took a little longer to deal with the issues, but he focuses on solving their problems. As a result, his callback rate was very low.

Katie has the same talk time goal. She handles issues for 100 customers for an average talk time of about five minutes. 50 of them call back the next day.

This isn’t a good example of We Do More with Less. She might’ve talked to more customers than John, but she wasn’t focusing on fixing their problems. As a result, half of them end up calling back.

Oliver and Tina’s examples earlier might’ve been fictional, but John and Katie’s are real-world examples. Katie was always getting bonuses and winning “Employee of the Month” because of her great numbers. Meanwhile, John often got calls from people Katie had talked to the day before.

Talking to them, it was painfully obvious she was sticking to the company’s script for troubleshooting. Perhaps a little too much. If the script didn’t work, she’d make up a story that the system needed a few hours to fix their issue. If it doesn’t work, call back. Since it never worked, they’d call back and talk to someone else — leaving Katie with her great numbers.

Would Katie’s behavior be acceptable at your company?

At my company, the way Katie handled her projects would be a trigger for coaching from leadership because it directly contradicts our core value of We Do More with Less. On the surface, it might’ve seemed like she was getting more done. She was only accomplishing so much by sacrificing her effectiveness. At the end of the day, she was doing less to push the company forward than John.

It starts with your core values

I can’t count the number of times I’ve seen a company’s values hung on their wall, but when I ask an employee what their core values are they come up empty. When values make their way onto a poster on the wall, they’ll blend in with the rest of the decorations if they’re not top of mind.

Like a great sports team constantly practicing the fundamentals, your company needs to focus on your values every day.

Without a conscious focus on your culture each day, you’re letting your hodgepodge culture take precedence as standard operating procedure. Your employees may have the best of intentions, but when everyone comes from different backgrounds, they’ll usually end up rowing in different directions. That doesn’t help a business move forward very efficiently.

When I’m coaching a new entrepreneur, one of the first questions I like to ask is, “What are your core values?”

So, when the young man from earlier approached me after my keynote, I asked him the question. He rattled off a list of buzz words, including one I hear often: Quality.

After digging deeper into what that meant, within only a couple minutes, he admitted his company would rush orders for customers to hit a deadline. You could see the look in his eyes flash — it was like a lightbulb went off. “Quality” wasn’t really one of his personal core values. It was an empty promise he was willing to throw out the window for the right price.

Core values aren’t aspirational; they’re how you already live. They are the codes of conduct that you won’t break no matter what. Once you’ve identified what your core values are, you need to define them for your tribe. Using “Quality” as an example, if that truly is one of your core values, what does that mean? How will you communicate that core value to your tribe?

I’m a sports fan, so I like to use the metaphor of the rules of the game. Every basketball player knows what they can and cannot do when they walk on the court. There’s no confusion about it. Every rule is clearly defined, and it’s something every team practices every day.

When your people walk in the front door each day, they’re coming to play. Your company already has a culture, you just need to help set your team up for success.

As a leader, it’s your job to take charge of your company’s culture. Be proactive instead of reactive. The first step in that process is to establish and clarify your company’s core values for your tribe. Define what your core values mean so there’s no question about what it takes to play the game.